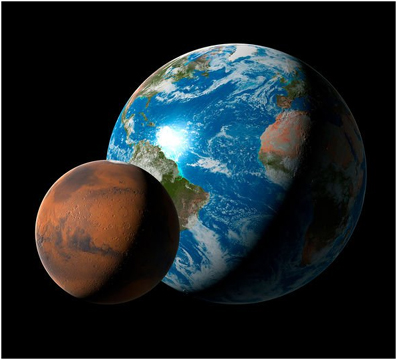 Experts from the Commonwealth Scientific and Industrial Research Organization (CSIRO), Australia’s national scientific agency, have created a new atlas of the universe.

The agency’s experts mapped three million galaxies in more detail and in a record time of 300 hours, compared to previous mappings that lasted years.

Water on the moon!

NASA has confirmed the presence of water on the sunlit surface of the Moon. This finding indicates that water can be distributed over the lunar surface.

NASA’s Stratospheric Observatory for Infrared Astronomy (SOFIA) has detected water molecules (H2O) in Clavius ​​Crater, one of the largest visible craters on Earth in the southern hemisphere of the Moon.

Do black holes have hair?

A black hole can grow hair-like structures if it spins fast enough, a team of researchers has found.

In a new study, researchers used numerical simulations to indicate that black holes can spontaneously erupt what has been described as hair once they reach a certain spin rate. This hair is otherwise known as the scalar field.

Specialists at Cambridge College have led the production of the infinite book of two billion stars, which they accept could reveal a perspective on how our system came into being and what might happen in the inaccessible future.

The return of the capsule!

After a long wait of six years, samples of an asteroid from a distant space have recently arrived in Japan. Received with smiles and applause, the sample was taken from an asteroid 300 million kilometers from Earth and was searched as part of a space probe trying to understand the source of life.

In December 2014, Hayabusa2 left for an asteroid called Ryugu. Shortly after reaching its destination, it suffered a hard landing, but managed to overcome it to collect asteroid dust samples in a capsule.

The lakes on Mars

Looks like we could get closer to discovering life on Mars. Two years ago, scientists discovered a large reservoir beneath the frozen surface of Mars. Now they have found three more such lakes! A paper in Nature Astronomy claimed that researchers found three thickened lakes beneath the surface of the red planet, in addition to the previously discovered saltwater lake. Radar data from the European Space Agency (ESA) were used to detect water bodies.

The nearest black hole on Earth is gone

Black holes are probably the most famous celestial bodies in popular culture. There are theories such as black holes that are portals of time travel, a passage to another universe, etc. It is not surprising that the mysterious black holes have a special importance in popular perception. Everyone knows that there is a supermassive black hole in the center of our galaxy. But that’s too far. “It was” a black hole closer to home, about 1120 light-years away. Now, a study has said that there may not be a black hole at all.

The star that became kaput

A giant star that has been under the observation of astronomers for over ten years has suddenly disappeared. The star in question was in a dwarf galaxy 75 million light-years away and was one of the largest stars in the known universe. The star, which was 2.5 times brighter than the Sun, left no trace.

The strangers were following us

A new study has identified more than 1,000 nearby stars that are favorably positioned to observe life on Earth. The team identified 1,004 stars with Earth in their line of sight, which could contain habitable Earth-like planets. These stars are all 326 light-years from Earth.

Luna is a long-lost brother

Scientists have reason to believe that the Earth’s Moon has a brother. His official name is (101429) 1998 VF31 and he could be our brother of the Moon. The celestial body is probably 4.5 billion years old, with a lunar appearance, and is twinned with the moon. Until now, scientists did not know that our natural satellite even had a brother. Apparently it was too small to be observed by astronomers. Given how old it is, we’ll find out later.