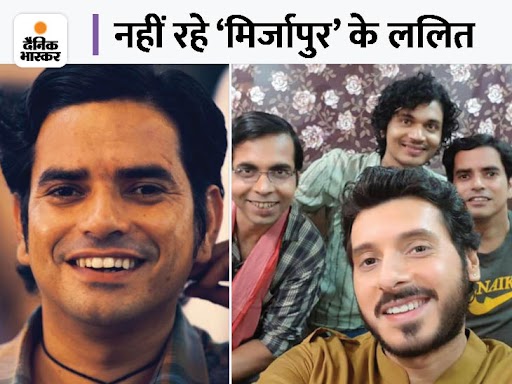 A few moments ago

Brahma Mishra, who played the role of Lalit, a special friend of Munna Bhaiya in the web series Mirzapur, has passed away. Brahma was sent home on November 29 after complaining of chest pains, but at home he suffered a heart attack and died.

Tragically, his body was lying in the bathroom of his house on Yari Road Versova in Mumbai for three days. Mumbai Police is currently conducting postmortem of his body and will know the exact time and cause of death.

Brahma was a resident of Bhopal
Brahma Mishra, a resident of Bhopal Raisen, was 32 years old. He was educated up to class X in Raisen. His father worked in the Land Development Bank. Apart from Mirzapur, Brahma had also acted in films like Kesari, Haseen Dilruba, Manjhi, Badrinath Ki Dulhania.

The last film came this year
Brahma made his film debut in 2013 with Chor Chor Super Chor. His last film was ‘Haseen Dilruba’ against Tapsi Pannu in 2021. He never had to face financial crisis during the struggle in Mumbai as he was supported by his father and elder brother Sandeep.

God must have imagined death
Two days ago, on November 30, it was Brahma’s 32nd birthday. 5 days ago Brahma had made a post on Facebook. In which he has written – Only the destruction of attachment is called salvation. Brahma had also posted a photo of himself on Instagram, in which he did not give any caption, but this is a photo clicked outside his Bhopal home.