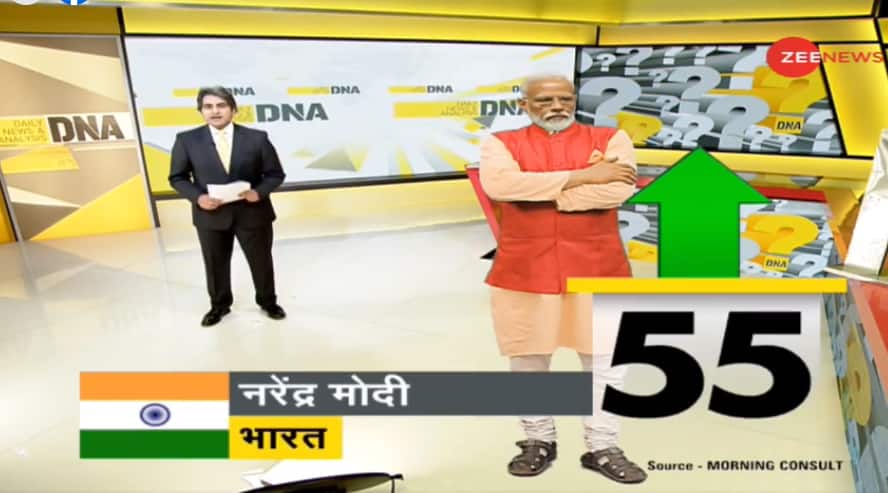 New Delhi: Prime Minister Narendra Modi has once again proved that the leadership that tries to alleviate the problems of people in difficulty is the true leader. A data firm, Morning Consult, which tracks the approval ratings of world leaders, has raised net approval for it to 55%. The popularity of Prime Minister Modi has grown to the highest of all global leaders.

Prime Minister Modi is the only global leader whose rating has remained in first place amid the coronavirus situation, while US President Donald Trump has dropped to ninth place. This development may surprise those who said that the prime minister failed to do a good job during the COVID-19 pandemic.

The investigative agency, which conducts surveys and research globally, said more than 75 percent of people approved of Modi, while 20 percent disapproved, earning a net approval rating of 55. A similar figure for German Chancellor Angela Merkel is 24 percent, while she is in the negative for British Prime Minister Boris Johnson.

The US survey research company is currently tracking the approval rating for government leaders in 13 countries – Australia, Brazil, Canada, France, Germany, India, Italy, Japan, Mexico, South Korea, Spain, United Kingdom, United States . The survey will be presented with a real-time perspective on the changing political dynamics around the world.

Other leaders who have seen an increase in their popularity include Mexican President Andres Manuel Lopez Obrador and Australian Prime Minister Scott Morrison. As of December 22, the Mexican president has scored 29, just ahead of the Australian prime minister who could score 27.

US President Donald Trump has received minus 15 rating points, and is currently at 70 rating points from the Indian Prime Minister. The US president continued his victory, but lost in the recent elections, as he failed to properly manage the COVID-19 situation.

Based on a seven-day moving average of adult citizens from 13 countries, French President Emmanuel Macron is in last place with minus 25 rating points. This clearly shows that he failed to get support from the French.

Prime Minister Modi’s political status is the highest of the global leadership, as no other leader could approach him. His commitment to addressing the crisis was clearly stated on Thursday, while laying the foundation stone of the All India Institute of Medical Sciences in Rajkot by video conference.

Prime Minister Modi said: “I used to say ‘jab tak davai nahi dhilai nahi’, but now our mantra for 2021 should be: Davai bhi, kadaai bhi (yes to medicine and yes to prudence)”. He added that “preparations are in the final stages for the COVID-19 vaccination program in the country. People will receive doses of vaccine made in India.

“We are working on a mission to improve medical education in India. Following the formation of the National Medical Commission, the quality and quantity of health education will improve,” Prime Minister Modi added.