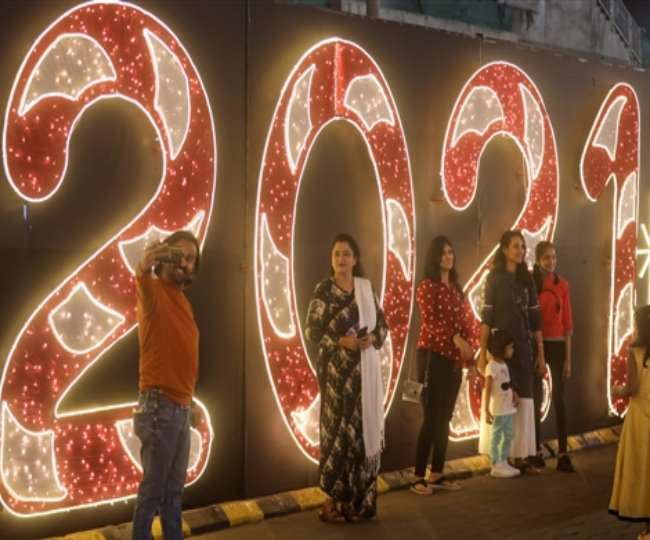 New Delhi This time the new year 2021 was welcomed in a different way. Due to the Corona crisis and restrictions on New Year’s celebrations, night curfews in various parts of the country prevented the celebration. To ensure that people follow the Corona guidelines, closely monitored. A large number of police and drones were deployed.

New Delhi: A large number of security forces have been deployed at Connaught Place to celebrate the New Year. Night curfew will continue in the capital today and tomorrow. pic.twitter.com/bKTiUyC1np

Curfew in the capital Delhi

The Delhi Disaster Management Authority (DDMA) imposed a two-day night curfew in the wake of the Corona crisis in the national capital. The order is in effect from 11 a.m. to 6 p.m. on December 31 and January 1.

Farmers protesting against the Agriculture Act on the Ghazipur border staged a candlelight vigil on New Year’s Eve. #FarmLaws pic.twitter.com/vze4MrlcNR

At the same time, about 30,000 police and drones were deployed in Mumbai to monitor the people. Section 144 remained in force in the city. Night curfew was imposed from eleven o’clock at night.

Restrictions in Odisha and Kerala

Many restrictions were imposed in view of the New Year celebrations in Odisha and Kerala. The curfew remained in Odisha from 10 pm on Thursday. Night curfew was maintained in Kerala and drones were deployed for surveillance.

Health Minister Satyendra Jain said a night curfew has been imposed to prevent congestion and keep the corona contagious situation under control. Special surveillance was carried out at Connaught Place and other crowded places.

New Delhi: On New Year’s Eve, the Khan Market area in the national capital was adorned with colorful lights. pic.twitter.com/qKbdMYR3GR

No public event and no more than five people were allowed to stand together during the curfew in the national capital Delhi. However, licensed hotels, clubs, and restaurants were no longer banned.

Uttar Pradesh: Some people were seen shopping in the market in Gorakhpur to celebrate the New Year due to the Corona outbreak. pic.twitter.com/RBHuDek80i

In Gorakhpur, Uttar Pradesh, some people were seen shopping in the market to celebrate the New Year due to the corona epidemic. A florist said that this time the weather is a little cooler because of the corona, the work was better last year.

Himachal Pradesh: Police have asked to clear the ridge area of ​​Shimla as a night curfew has been imposed since 10 pm.

Night curfew has been imposed in Shimla, Kangra, Mandi and Kullu from 10 pm to 6 am. # New Year 2021 pic.twitter.com/xRygGIRdXr

Shimla, Kangra, Mandi and Kullu in Himachal Pradesh were under curfew between 10 pm and 6 pm. Police in Shimla were seen announcing the evacuation of a crowded area on New Year’s Eve. There were strict curfews in Shimla from 10 pm.

In Durgapur, West Bengal, people celebrated together, ignoring the Kovid guidelines. At this time, rules like physical distance and mask were also not taken into consideration …