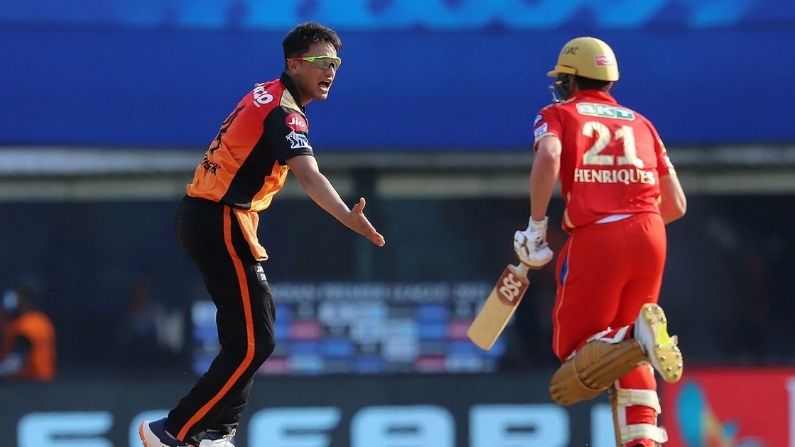 The player was suddenly caught by the captain and asked to bowl the first over in front of the explosive batsmen.

The Indian Premier League played a low scoring match on Wednesday. The match was between Punjab Kings and Sunrisers Hyderabad. Punjab won the toss and elected to bat first. But under KL Rahul, the team could not play in the entire 20 overs and it was reduced to 120 runs. The foundation of Punjab’s poor performance was laid from the first over. This was the first over in which only three runs were scored and Mayank Agarwal’s catch was also lost to Rashid Khan. But there was another special thing about this six. That meant the Hyderabad batsman, who hit the first six, did not know he would have to bowl the first over. Instead, the captain gave him the ball abruptly and gave him the responsibility of bowling the first over of the Punjab innings.

In fact, when skipper KL Rahul and Mayank Agarwal opened the innings from Punjab, left-arm spinner Abhishek Sharma came in to bowl the first over for Hyderabad. It is not new for spin bowlers to start bowling on the pitch at Chennai’s MS Chidambaram Stadium. But after winning the match, Sunrisers Hyderabad skipper David Warner revealed that the bowling plan was suddenly hatched with Abhishek Sharma and the bowler was not aware of it. So listening to this was a little different and new.

Usually the captain and the team decide who will start the bowling attack, but this was not the case in this match. “When we came on the field, Abhishek didn’t know he wanted to bowl the first over,” David Warner said after the match. I didn’t want him to know about it beforehand and he would start thinking more than necessary. By the way, Abhishek Sharma did not disappoint his skipper and scored just three runs in the first over. In this too, KL Rahul bowled a single off the first ball and then Mayank Agarwal could not score a single off four balls. Mayank then played a shot in the air on the sixth ball but Rashid Khan dropped the catch. No run scored on this ball. In the match, Abhishek took two wickets for 24 runs in his 4 overs. He showed the pavilion to Punjab batsmen Deepak Hooda and Moises Henriques.