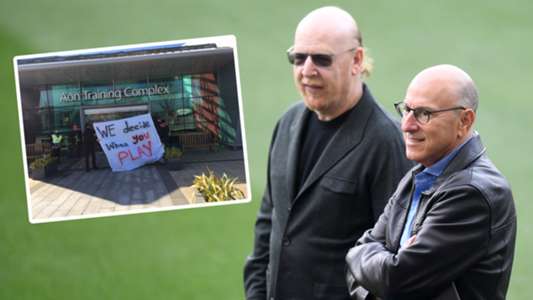 Manchester United supporters broke into the Carrington club’s training ground on Thursday morning to protest against the club’s owners.

About 20 fans blocked the entrance to the training ground before entering and taking pictures with banners that read: “We decide when to play”, “Glazers out” and “51% MUFC 20”.

The head of the Red Devils, Ole Gunnar Solskjaer, spoke with the protesters, who entered the site shortly after 9:00 (BST), before they were escorted from the headquarters.

Fans entered the club’s training ground before most of the first team arrived and blocked both entrances while sitting with their banners. The “51%” banner refers to fans who hold the majority of voting rights at the club, a common pattern in German football.

The protesters headed to the training ground to the first team’s grounds, where they posed for pictures with banners and asked to speak to Solskjaer.

It is understood that the Norwegian went out to talk to the fans, together with the technical director Darren Fletcher, the coach of the first team Michael Carrick and the midfielder Nemanja Matic.

The group left shortly after, and while the police were called, it is understood that no arrests were made.

What did Man Utd say?

A statement from the club read: “Around 9 am, a group had access to the club’s training ground.

“The manager and others spoke to them. The buildings were safe and the group left the site.”

Why are they protesting?

Manchester United fans have been upset over ownership of the club since the Glazer took over in 2005, when there have been numerous protests.

The basis of their anger is around the debts that were brought to the club and many fans believe that the American owners are not based on United’s best interests.

And the protests gained momentum again after the Super League announcement on Sunday, the fans being left frustrated by the lack of communication.

Chelsea supporters were seen gathering on Tuesday night in front of Stamford Bridge, with Liverpool fans holding their own protests on Elland Road on Monday night.

Since United did not have a game until Sunday, away to Leeds United, the fans decided another way of action, heading to Carrington.

A statement from the Manchester United Supporters’ Trust said the proposal to form a separatist league with 11 other clubs was a “betrayal of everything the club had ever claimed”.

They added: “A Super League based on a closed shop of rich self-selected clubs goes against everything that is football, and Manchester United should represent.”

The reaction of fans, players, managers and official organizations led United to decide to withdraw from the proposed new competition, and Joel Glazer wrote an open letter to fans to admit that they were wrong with their decision to form the league.