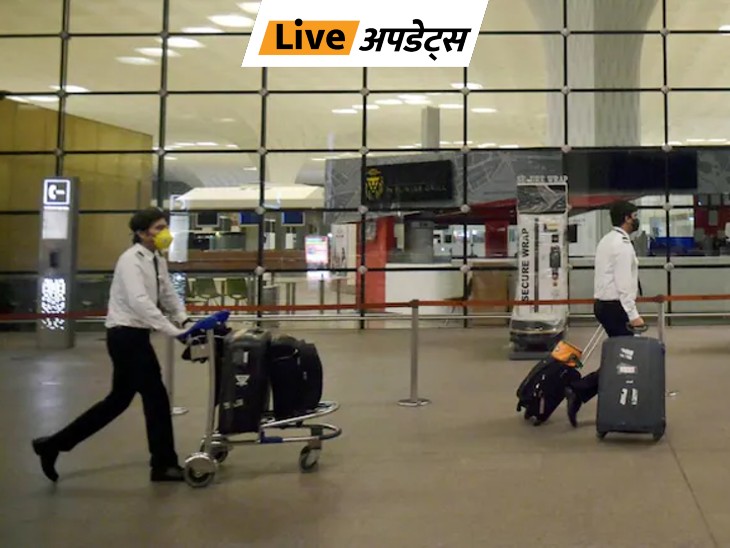 A few moments ago

A new variant of Corona Omicron has also reached India. The first two cases in the country have been found in Karnataka. One of them is 46 years old and the other is 66 years old. This information was given by Love Agarwal, Joint Secretary, Ministry of Health on Thursday. The new type of corona, Omicron, is expected to spread rapidly, he said. It can be 5 times more contagious. So far, 373 cases of Omicron have been detected in 29 countries.

He said the number of corona patients in the country has been steadily declining since last one month. It is a matter of concern that the positive rate is still more than 10% in 15 districts. In 18 districts it remains 5 to 10%. Kerala and Maharashtra are the only two states with more than 10,000 active patients. More than 55% of the cases in the country are here.

He said 49% of the population has received both doses of the vaccine. A door-to-door vaccination campaign has been launched. There are currently 99,763 active corona patients in the country. In the last 24 hours, 9,765 new patients have been found.

Other updates related to corona in the country …

The Maharashtra government has created a new category for coroner cases among foreign travelers. 6 countries have been placed in the high risk category. These include Botswana, Namibia, Iswatini, Lesotho, Zimbabwe and South Africa. Passengers coming from these countries need to be institutionally segregated.

4 passengers from South Africa who came to Mumbai corona positive
Four South African corona passengers have tested positive in Mumbai. Their samples have been sent for genome testing. Mumbai Mayor Kishori Pednekar said that RT-PCR has been made mandatory for passengers coming from ‘risky’ countries.

Health ministers meet with states on the threat of Omicron
Union Health Minister Mansukh Mandvia will hold a meeting of Ministers of State and Union Territories today. It will review corona testing and surveillance measures at the airport. Yesterday, India tightened rules for overseas travelers, especially from countries where Omicron cases have been detected.

At the same time, 4 more people from high-risk countries in Delhi were found to be corona positive in the threat of Omicron. He has been admitted to Loknarayan Jayaprakash Hospital. Their samples have been sent for genome sequencing. Delhi Health Minister Satyendra Jain said that every passenger coming from abroad would be required to take RT-PCR test at the airport.

RT-PCR tests are being conducted at Delhi Airport. (File photo)

Three people returning from an international flight in Mumbai tested positive
Three passengers tested positive in Mumbai on Wednesday after guidelines for RT-PCR testing of returnees from international flights in the country were implemented. The passengers had returned from Mauritius and London. In addition, the corona test report of a foreign passenger on Tuesday also came positive on Wednesday.

With these four new cases, the number of suspected patients of the new corona type omicron in Mumbai has now risen to five. Samples of these four have also been sent for genome sequencing.

In an application to the country’s Drug Controller General (DCGI), Prakash Kumar Singh, director of regulatory affairs at the Serum Institute, said the UK’s medical regulator had already approved a booster dose of AstraZeneca’s covid vaccine. In that case, the company’s vaccine should be approved in India as well.