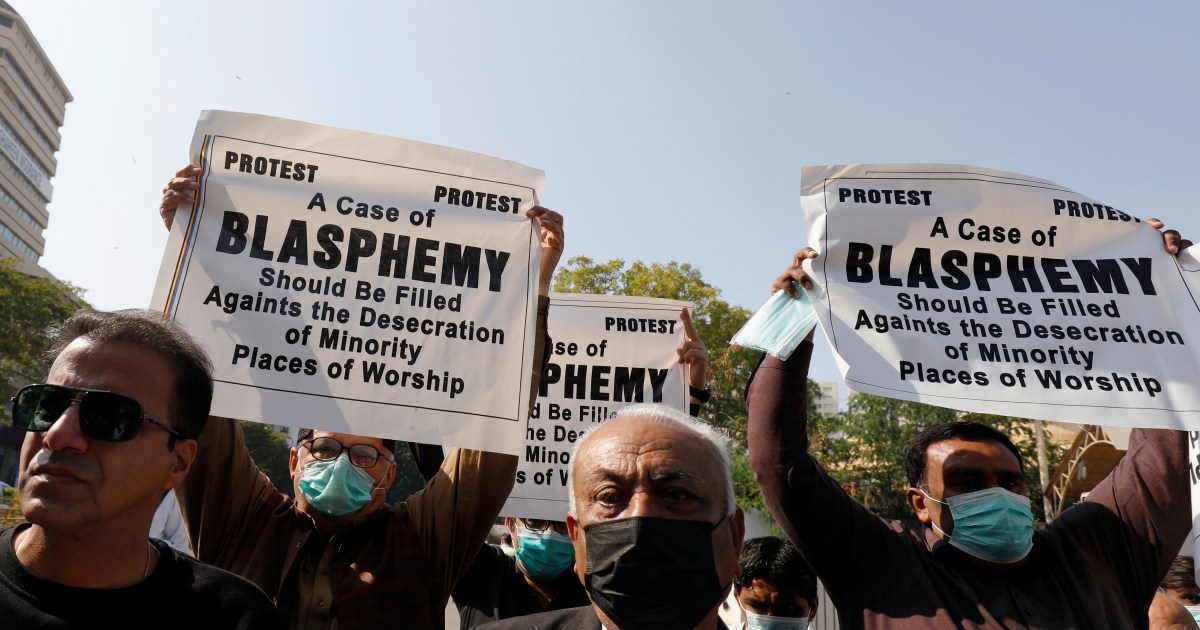 Pakistani police arrested more than a dozen people in overnight raids a day after Shri Paramhans Ji Maharaj Samadhi, a Hindu temple, was set on fire and severely damaged by a mob in northwestern Khyber Pakthunkhwa province, they said. officials on Thursday.

The attack on the temple on Wednesday in the town of Karak, about 100 km (62 miles) southeast of the capital of Peshawar province, condemned human rights activists and the Hindu minority community.

Local police said they detained at least 14 people in overnight raids and several raids were underway to arrest people who participated or caused the mob to attack the temple.

The attack came after locals were apparently offended by a planned expansion of the temple, which has been renovated for years.

The Hindu community – which includes less than 2% of Pakistan’s 200 million people – had planned to expand the temple as part of renovations, according to district police chief Irfanullah Khan, who spoke to AFP.

He said a house adjacent to the temple has been bought by the community and is being renovated, offending locals who reported the move, saying the 2015 Supreme Court decision was conditional on the temple not being extended.

According to witnesses, the crowd was led by a local cleric and supporters of the Jamiat Ulema-e-Islam party in Pakistan.

He took to Twitter on Thursday, saying that attacks on places of worship of minority religious groups are banned in Islam and “protecting the religious freedom of minorities is our religious, constitutional, moral and national responsibility.”

“I want to warn our people that anyone in Pakistan who targets our Muslim citizens or their places of worship will be treated strictly. Our minorities are equal citizens of this country, “Imran Khan wrote on Twitter in February.

In Karachi, the capital of Sindh province and where most Hindus in the country live, more than 200 people protested in front of the Supreme Court, demanding justice.

“You have to respect the religion of others. We are Pakistanis and, for God’s sake, no one should give us a certificate of loyalty, “said Mangla Sharma, a Hindu member of the Sindh provincial assembly.

Gopal Kamuany, president of the Hindu Council of Pakistan, accused local authorities of standing while the attack took place.

“In the video of the attack, the administration only watches in silence as the crowd dismantles the temple. What kind of justice is this, “Kamuany said.

The attack comes weeks after the United States placed Pakistan on a list of “countries of particular concern” for violating religious freedom.

On Wednesday, Pakistani Human Rights Minister Shireen Mazari said the government had a responsibility to “ensure the safety and security of all our citizens and their places of worship.”

The incident comes weeks after the government allowed Hindus to build a new temple in Islamabad on the recommendation of a council of clerics.

Although Muslims and Hindus generally live together peacefully in Pakistan, there have been other attacks on Hindu temples in recent years.

Most Pakistani minority Hindus migrated to India in 1947 during the division of India and Pakistan.