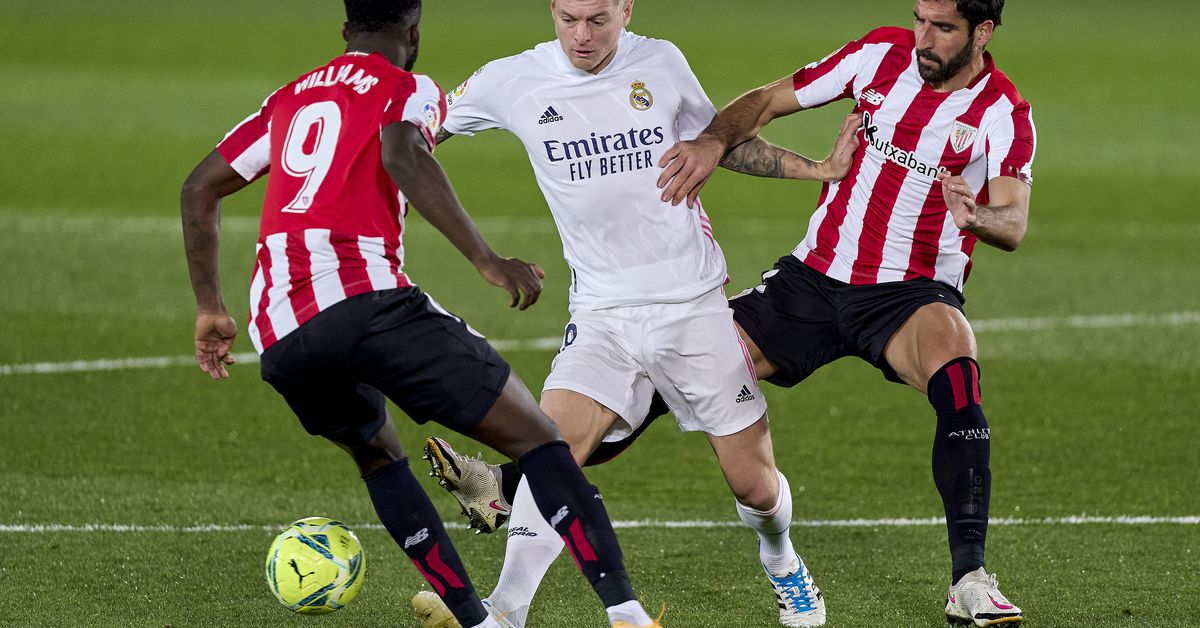 It took a team determined by Real Madrid to come out on top against Athletic Club, but the hard work paid off.

The opposing supporters loudly informed the referee that he was too lenient when he only showed Raul Garcia from Zedine Zidane a yellow card after a mistimed challenge from behind 70 minutes into the game. In the end, the opponents cracked and the goals of Toni Kroos and Karim Benzema sealed the victory with 3-1.

Thibaut Courtois – 8.5: Not much work was done in the first half. He made the initial save against Capa in the second, but was disappointed again by his defense on his return. He came back again in the 84th minute and then made another crucial save during the break to prevent the match from going 2-2. Clutch.

Dani Carvajal – 8: Very strong defensive work tonight. He seemed determined to break a tough opposition. He assisted Benzema for the winning goal. Finished with three dribbles a key pass and an attack.

Raphael Varane – 7.5: Good coverage of all Iñaki Williams matches. He could not recover fast enough to prevent Capa’s recovery shot. Lots of permits. Finished with five earned antennas and one attack.

Sergio Ramos – 7.5: Miscommunication in the back leading to the goal of equalization. Ramos was in a good position and Capa got to the ball faster. Two header attempts, but they couldn’t do any of them. Finished with four earned antennas and a key pass.

Ferland Mendy – 7.5: Great run in the last game, but he couldn’t stand or find Benzema. Solid defensive change tonight and extraordinary passes (finishing with a completion rate of 98%). He also had one shot, two key passes and two approaches.

Fede Valverde – 7.75: They seemed eager to get involved in the game right from the start and it was nice to see him back in action. Two goal attempts, 97% pass completion, one key pass and dispossessed once. Replaced after 64 minutes.

Toni Kroos – 8.75: Great match again. He scored the opening goal just before the break. Another shot in the second, but did not test -Simón too well. He fell back on defense as the clock ticked, preventing Madrid from conceding extra goals. Finished with four photos, completion of 97 passes, an aerial win and a key pass.

Luke Modric – 8: Everywhere on the field helping again in defense, while changing the speed for Real Madrid. Take Benzema for the second to get the victory. Finished with a single shot, a dribble, three key passes and three approaches.

Lucas Vazquez – 8: Space was found along the wing that helped Real open up against a blocked Athletic. He finished with a single attack, two key passes and was dispossessed twice. Replaced after 75 minutes.

Karim Benzema – 8.5: Couple header opportunities and some nice touches on the ball. He had to wait until the 74th minute to find the magic touch and score his first. Then he got the victory while stopping on a fast counter. Finished with four shots, two dribbles, a key pass and an aerial win

Vini Jr. – 7.75: Much more active than in recent matches, which is great to see. He assisted Kroos’ goal and also had the ball in the back of the net, but was ruled out of offside. Finished with four key passes, three shots, 97% completion of passes, a dribble, an attack, but dispossessed twice. Replaced after 64 minutes.

Isco – 6.75: He came for Valverde in the 64th minute. Good intentions and plays tonight. Continued by Rodrygo, but could not touch correctly. I had the chance to score on my own, but he couldn’t find the target.

Marco Asensio – 6.75: I came to Vini Jr. in the 64th minute. He had one shot, but it came out very well. Again he needs to be more active as a replacement.

Rodrygo – 6.75: Lit in the 75th minute for Vazquez. A good touch of the ball to play in Isco. Finished with a single attack and a key pass.