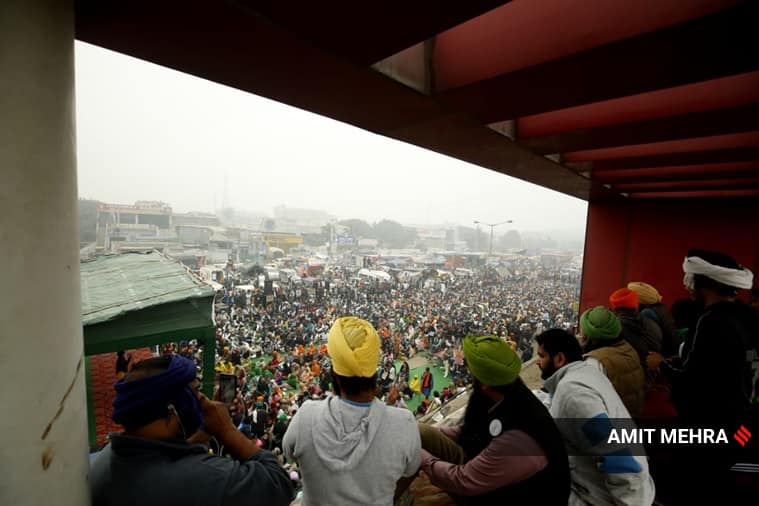 A group of farmers standing above the trucks raise slogans during the ongoing protest against the centers’ new agricultural laws at the Singhu border in New Delhi. (Express photo by Amit Mehra)

At least two farmers were killed and eight injured on Tuesday morning after a truck hit their cart in the Karnal district of Haryana. They were returning to Patiala on the border with Delhi, where thousands of farmers are protesting against the three 20-day laws of the Center.

The deceased was identified as Gurpreet Singh (22) and Labh Singh (62), from the village of Saferal in Patiala. The injured were hospitalized in three hospitals in Patiala, including Rajindra Medical College and Hospital and Karnal.

Two # farmers died, eight injured on the night of December 14, 15, in a road accident between tractor-truck and truck near Trawari tehsil in #Karnal district #Haryana. All the farmers in the cart were from the village of Safera in #Patiala . @IndianExpress @iepunjab

According to police, the accident on the Taraori flight was caused because “the driver of the truck seemed to have fallen asleep at the wheel”. A case was registered against the fleeing driver, the SHO inspector of the Taraori police station told the news agency PTI.

The number of farmers protesting on the borders of Delhi is growing every day, with over 60,000 protesters camping there so far. Apart from Punjab and Haryana, farmers in Madhya Pradesh, Uttar Pradesh and other parts of the country have joined hands in the ongoing unrest.

The president of the Muktsar district of the BKU (Ugrahan) faction, Pooran Singh Doda, was admitted to the PGI, Rohtak, on Tuesday after a car hit him near the Tikri border protest site. The 75-year-old man is in critical condition.

He was hit by the car a short distance from the protest site while crossing to go to the toilet.

Pooran Singh Doda (age 75), district president #BKU Ugrahan is admitted in #PGI #Rohtak in critical condition Yesterday at midnight, a car hit him #TikriBorder outside the protest site as he crossed it to go to the bathroom. @IndianExpress @iepunjab

(With entries from Raakhi Jagga, PTI)