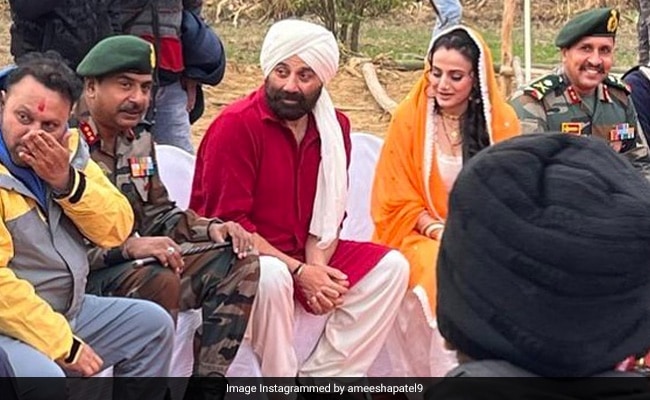 Sunny Deol has started filming for her long-awaited film Gadar 2, a sequel to the 2001 superhero movie Gadara. To continue, Sunny Deol will resume her role as Tara Singh and will be accompanied by Ameesha Patel, who played the role of Sakeena in the first edition. An image from the filming was shared online by Bollywood commercial analyst Taran Adarsh, in which Sunny Deol is seen in a kurta and turban and holding what appears to be an old box. Sharing the picture, Taran Adarsh ​​wrote: “Sunny Deol, Anil Sharma, Zee: ‘Gadar 2 ‘ start today. ”

Sunny Deol also shared an image on Instagram, confirming that filming for the film has indeed begun. In the caption, he wrote: “We started filming Gadar 2. I will post Tara Singh soon. “

Earlier, lead actress Ameesha Patel also shared some images from the first day of filming. She wrote, “Gadar 2. Muhurat shot. The general was kind enough to take the opportunity. “

In another picture, Ameesha Patel and Sunny Deol are seen in their costumes accompanied by director Anil Sharma and several army officers.

Anil Sharma also shared images with the filmed muhurat and wrote: “The general was kind enough to decorate the occasion of the muhurat of our future film. Gadar 2. We are very grateful, sir. “

Earlier, on the occasion of Dussehra, Sunny Deol distributed a moving poster of the film. He wrote in the caption: “After two decades, the wait is finally over! On Dusshera’s auspicious day, we present the poster with the movement Gadar 2. Katha continues… ”