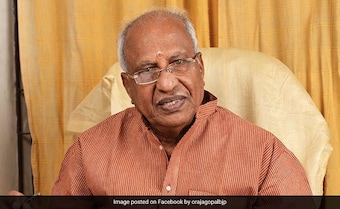 O Rajagopal, the lone BJP MLA in the Kerala Assembly, upset the saffron party in an unexpected incident and backed the House’s proposal to repeal the controversial Union Agriculture Act. But, a few hours later, the MLAs, in a statement changing their role, asked the House to oppose the resolution. Farmers have been protesting on the Delhi border for the past one month against the three new agricultural laws.

In a special session of the Kerala Assembly on Thursday, Chief Minister Pinarayi Vijayan proposed a unanimous vote with the support of the ruling Left Democratic Alliance (LDF), the Congress-led United Democratic Front (UDF) and the BJP. “The resolution was passed unanimously,” Rajagopal told reporters after the convention. I gave my opinion (in the proposal) on some issues, there was a difference which I mentioned in the House. “They fully supported the proposal.”

When Rajagopal was told that he was going against the role of the party, he said that this is a democratic system and we need to agree. However, later changing his stance, Rajagopal said in a statement that he strongly opposed the resolution in the House.

That said, I have clarified my role in the House. I did not oppose the central laws, nor did I go against the central government. These laws will greatly benefit the farmers. When LDF and UDF members underlined that the Prime Minister is not discussing with the farmers. On this, Rajagopal said that he underlined that before such a discussion takes place, farmers’ organizations are demanding strict repeal of agricultural laws.

However, in the special session, Rajagopal said during the discussion in the House that the new laws would protect the interests of farmers and intermediaries. He said that those who are opposing this agricultural law are standing against the farmers. Rajagopal said the new law would double the income of farmers.

The senior BJP leader said the news that he was against the central law was “baseless”. He blamed the Speaker for not explicitly asking those who opposed and supported the proposal. BJP state president K. Speaking to reporters in Thodupuzhahat, Surendran condemned the UDF government’s proposal and termed it as ridiculous. Regarding Rajagopal’s role, Surendran said that he did not know about it and would talk to him. He said that the BJP has no opinion on the Centre’s law.