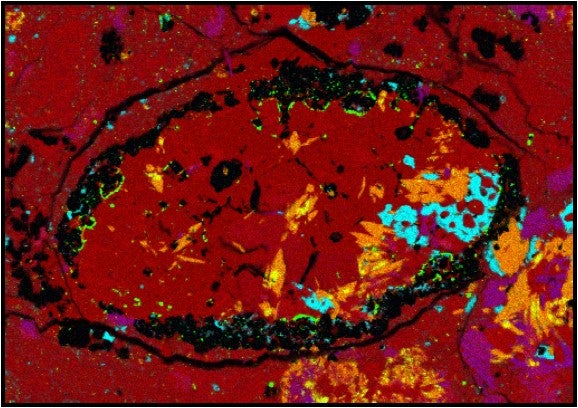 A small fragment of a meteorite that arrived on Earth in 2008 appears to have come from the asteroid, according to researchers who studied the sample.

The parent asteroid appears to be about the size of Ceres, the dwarf planet is the largest object in the asteroid belt, researchers say. It also appears to have formed around the water and, under some pressure, they discovered.

Meteors and meteorites can provide a key way to understand more about our solar system because they come from asteroids left over from the formation of our planet and its vicinity.

While many are left in the asteroid belt between Mars and Jupiter, others have been separated and sent pieces into the inner solar system. One of these pieces arrived 12 years ago and was used to study the still mysterious, large parent asteroid that seems to be hiding in our solar system.

The shards of the meteorite known as the Almahata Sitta or AhS were already notable. It arrived on Earth in 2008, when a 9-ton asteroid entered Earth’s atmosphere and exploded in about 600 meteorites somewhere over Sudan.

It was the first time scientists have been able to predict an asteroid impact before it actually happens. This meant that they managed to remove 23 kilograms of samples, which have been the subject of a scientific study since then.

Get inspired every week with the latest lifestyle trends

Get inspired every week with the latest lifestyle trends

“We were given a 50 milligram sample of AhS to study,” said Dr. Vicky Hamilton, a SwRI staff scientist, the first author of a paper published in Nature Astronomy, in a statement. “I mounted and polished the small fragment and used an infrared microscope to examine its composition.

“Spectral analysis identified a range of hydrated minerals, especially amphibole, that indicate intermediate temperatures and pressures and a prolonged period of aqueous alteration on a parent asteroid of at least 400 and up to 1,100 miles in diameter.”

Such amphiboles are rare in meteorites, such as the Almahata Sitta, which are known as carbonic chondrite and serve as a record in the early stages of the universe. As such, it could provide a new source of information about the materials present in the early solar system.